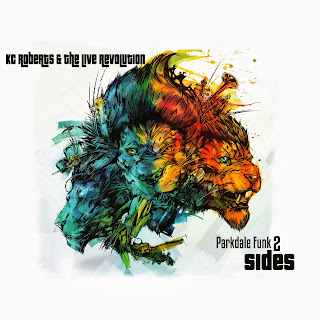 Parkdale Funk 2:  Sides
KC Roberts and the Live Revolution
(Independent)
5 out of 5 stars

After an ambitious crowd-funding campaign that netted $26,000, lots of festival and club shows, heavy promotion, and a feature on NOW Magazine, KC Roberts and the Live Revolution’s new funk album is being released to epic hype proportions.   From the looks of what I’ve heard, it does deserve all of the hype.

With a full horn section of trumpet, trombone, and tenor sax/flute, guitar, keys, bass and drums, plus string sections and touches of electronica, this is an album that covers the whole gamut of genres ranging from rock, R&B, funk, jazz, pop and techno, and this pot-pourri of genres is what gives KC Roberts and the Live Revolution its unique sound that stands out from among the rest.

What I also like about this album is that the album is a good throwback to the classic soul/funk albums of the 1970’s, which has influences of Philly soul, Parliament, Funkadelic, Isaac Hayes and even hints of James Brown.    KC Roberts and his band have a great grasp of the history of the funk genre, while making it their own and even making it accessible and cool to a younger generation.

Among the highlights are tracks such as the opener “Oh We Are Young”, which utilizes distorted electronic rock guitar that segues into heavy funk, “Cupid”, “The Bus”, and the closing 10-minute epic funk jam “The Battle for the Presidency”, which is pure Isaac Hayes throughout with its strings, horns, flute solo and rhythm playing.    That track alone is on par with another funk/soul classic, the Theme from “Shaft”.

For those that love jazz, funk, rock, R&B, techno, run, don’t walk to pick up this album.     Not only this record deserves all of the attention, but also I may say this boldly.   “Parkdale Funk 2: Sides” could be THE Canadian album of the year of 2013.