CD REVIEW: INTO THE DARK BY DAVID RUBEL 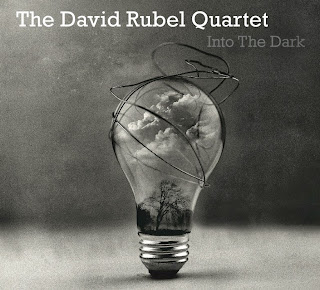 Into The Dark
David Rubel
Independent
FOUR OUT OF FIVE STARS

Young saxophonist, composer and educator David Rubel’s first CD is a very melodic, spacious take on jazz that hearkens to the records produced by the ECM label.    On all of his compositions he takes the music on a more relaxed, ethereal pace where the music breathes and the melody is allowed to soar and touch listeners.

The opening track, “Into the Dark”, is a fierce, lightly funky 7/4 groove that opens the disc on one of its intense, high energy moments before it gets into its ECM territory.   Among my favourite tracks is the melancholic “Abandon All Hope”, which is a moving ballad reminiscent of Joshua Redman and “Ever”, which is a 5/4 composition that ends on a hopeful, sprightly note.

Rubel’s choice of rhythm players shows his innate sense of simpatico and connection between the players, which effectively comes out within the music.   Rubel’s tone and playing throughout the album is full of emotion, soul, and passion, and his compositions are so accessible that even casual listeners can find something to like in this album.    Winston Matsushita, the piano player, shows off his classically trained chops very well in this record through his solos and empathetic comping behind the saxophonist.   Bassist Malcolm Connor keeps perfect rhythm and time plus takes in a few moving solos on tracks such as “Penchance to Dream”.   Robin Claxton displays sensitivity and complimentary playing on the album, showing his musical chops versus the rhythmic prowess common among various drummers.

All in all, “Into the Dark” is a fine debut from a fine set of young musicians that warrants repeated and careful listenings time and time again.