In Yorkdale’s new Dine on 3, I decided to have lunch at one of their food court offerings, the Japanese restaurant Su and Shi.

Su and Shi offers the best in sushi, teriyaki, sashimi and other festive delights, meant to tantalize the taste buds and awake the senses with every dish.

For lunch, at a good deal I decided to have the Chicken Bento Box special ($12.99), which is a special combo that consists of grilled teriyaki chicken, tempura vegetables, salad, and California rolls.     The chicken was well cooked to perfection and retained its juiciness throughout the dish.   The tempura was crispy, hearty, and complimented the chicken very well.    The California rolls are executed perfectly, looking fresh and tantalizing.   The salad cleansed the palate with a nice light dressing and complimented the full meal very well.     The portions were very generous and I was really satisfied on what was presented on the plate.

Craving for more of a sushi experience, I ordered the sushi pizza appetizer ($7.99), which was three types of seafood on a bed of a fried rice cake topped with a nice sauce and other fixings.   The portions of the sushi pizza pieces are very hearty and satisfying.

If you are craving some good Japanese food while on your shopping trip, Su and Shi is the definite place to go for all of your sushi and teriyaki needs.

Posted by Unknown at 2:03 PM No comments:

On a cool fall Friday night, I decided to attend a triple bill concert headlined by a great folk rock band known as the Wilderness of Manitoba.   I was in for a night of making new friends, hearing new sounds, and feeling the great positive love and vibe that emanated throughout the night.

The first act goes under the name T H O M A S, a group headlined by singer/guitarist/songwriter Thom Gill.    He opened the set with his effective take on soul, folk, and even gospel music, bringing a more eclectic and jazzier feel to contemporary Christian music.   I especially dug his very inventive, re-harmonized takes on Lenny Leblanc’s “Above All” (a classic praise and worship stable infused with soul and sass) and the Clark Sisters’ “Is My Living in Vain” (a more reflective, contemplative take on the tune versus the rousing, in-your-face original version).   Throughout his set I fell in love with his voice, his personality, and his soul, and I cannot wait to hear more music from this stellar artist.

The second act goes under the name Kite Hill.   Kite Hill was a departure from the jazzier, gospel feel of the first act since this time it was a classically influenced band that was piano and strings driven throughout.    I loved the rich vocals and the instrumentation of the group, ranging from upright bass, cello, and violin, to even the glockenspiel.   It was inventive alternative folk/rock music at its best and most creative, and it has something for both the rock fans as well as those who are inclined to lean towards classical music.

The main event was of course, the Wilderness of Manitoba, fresh off the heels from their third album, “Island of Echoes”.    What struck me with this band was their intricate harmonizations between the four lead vocalists.   They sounded like a full-fledged choir that was in sync, full bodied and in harmony with one another.    Plus, each one of the members is skilled in their own instruments, some fluctuating between percussion, violin, bass and trumpet.   The tunes were very catchy and harmonious, and the band is certainly one to watch on the Canadian music scene.

Three great acts for the price of one.   Surely I did not go wrong this time around. 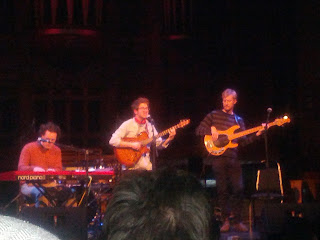 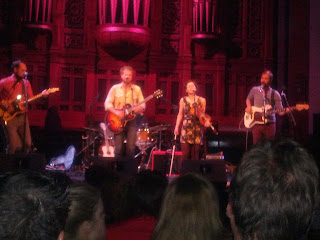 (The Wilderness of Manitoba)

Posted by Unknown at 3:26 PM No comments:

On a cool fall evening, I decided to attend a great double bill celebrating the release of a CD from an accomplished singer/songwriter.   The artists:  Elizabeth Shepherd and special guest Denzal Sinclaire.

This concert celebrated Elizabeth Shepherd’s fourth album as a leader, Re: Wind.   It is a departure of sorts from her original fare that was served on her past three albums.   This time, it is quirky and invigorating interpretations of jazz standards, cabaret, and pop music.

Denzal Sinclaire opened the evening with a great set of standard material, accompanied with such aplomb by young bassist Devon Henderson.   Through their brief set they went through Denzal’s many wonderful jazz hits, ranging from his takes of “I Got Rhythm” to “Nature Boy”.   Denzal’s voice was pure like crystal, and smooth like silk.   Devon’s bass playing was very rhythmic, well oiled, and full of life and vitality.

Elizabeth Shepherd, backed by long-time drummer Colin Kingsmore and bassist Gord Mowatt, became the main event with her rhythmic, soulful take on the jazz standard along with her singer/songwriter material.    From when I first heard her at a restaurant years ago until now, she has matured and blossomed into a Canadian jazz treasure that manages to challenge and surprise the listener with her lyrical chances and rhythmic interplay.

Since the music speaks for itself, here is both a video of Denzal Sinclaire performing “Nature Boy” and Elizabeth Shepherd with special guest Andrew Downing performing “Lonely House”.

Posted by Unknown at 1:07 PM No comments:

On a crisp fall evening this month, I decided to attend a concert featuring a legendary jazz vocalist.   The vocalist:  Mark Murphy.

As a kickoff to the long running Sound of Jazz Concert Series put on by JAZZ FM, they went with a bang by bringing in one of the great practitioners of jazz singing in Mark Murphy.  Not only that, it is a concert celebrating his 80th birthday, showing that at 80 he is still going strong and there is no signs of stopping at his musical development and showmanship in jazz.

It was a program of well executed standards ranging from Cole Porter’s “What is This Thing Called Love”, to original lyrical takes on classics such as Herbie Hancock’s “Maiden Voyage” complete with lyrics of his own.

Mark Murphy represents a singer who does more than just sing the lyric straight no chaser.   He takes risks, turns and twists that leave the audience spellbound and aching for more.   No wonder I told him during intermission that he is one of my favourite vocalists, with a style and pizzazz that is uniquely his own.

To close this brief review, I decided to include a video showing of Mark and his quartet perform the classic Betty Comden/Adolph Greene/Jule Styne standard hit “Just in Time”, exemplifying his mastery of jazz vocal singing at its best.

All in all, a great night from a great singer, and kudos to JAZZ FM 91.1 for bringing a world-class artist to kick off an amazing concert season.

In search of an exotic, healthy meal without breaking the bank, I decided to head over to one of my favourite haunts for Indian Cuisine, Veda Indian Takeout.

Veda, in Sanskrit language, means knowledge in English.  In turn, this indian takeout strives to provide healthy living through knowledge of the body, mind and spirit through healthy, hearty preparation of such fine Indian cuisine.    In terms of health, they have vegan options, meat is 100% Halal, 100% is free of nuts and all of the curries are gluten free.

To get a full spectrum of what to expect at Veda, for $10 (tax included), I got the Tiffin Talli deal, which consisted of a choice of rice, a choice of vegetable, and a choice of meat served with naan bread, salad and a drink.   For $10 you can’t go wrong getting healthy Indian food cooked in the highest order.

For my Tiffin Talli treat, I had Vegetable Basmati Rice, Butter Chicken, and Vegetable Curry along with whole wheat naan and salad.   The rice was full bodied and was not mushy at all (which I appreciate), and it was colourful to look at with all of the vegetables and unique yellow colour that accents the rice.    The Butter Chicken had a very spicy kick and maintained its juiciness and flavour through the meal.   The Vegetable Curry was also well seasoned, spicy, and had great accents throughout the dish.

If you are craving Indian Food but does not want to break the bank or your waist, Veda Indian Takeout is your surefire bet for excellent cuisine at prices that don’t hurt your wallet.