It’s that time of year again.    A time of blazing horns, soulful grooves and heartfelt melodies throughout the city landscape.    When it is the beginning of summer, it means one thing in the city of Toronto:  the TD Toronto Jazz Festival.

I managed on opening day to catch three great acts in which involves big band, contemporary jazz, and R&B/hip-hop.    These acts sure did not disappoint when it comes into ringing another year of great jazz and fun in the summertime at the TD Toronto Jazz Festival.

The first act featured the Brian Barlow Big Band doing a tribute to the music and legacy of Duke Ellington.   Presented by the Duke Ellington Society, it was a great kickoff by an all-Canadian band to the real core roots of jazz, swing and the blues while honoring an iconic composer, pianist and arranger to kick off the festivities.  All the classics were performed, such as “Caravan”, “Mood Indigo”, “Take the A Train” and “In a Mellow Tone” to name a few.    The band was swinging, the solos were hot, and the groove was tight from start to finish.

After a trip to Ellingtonia, I went to my first of three ticketed concert events held at the Church of the Holy Trinity.   This concert featured the solo guitar stylings of Kurt Rosenwinkel.    An accomplished guitarist, Kurt has managed to create a sonic soundscape through effective uses of melody, chordal harmonies, bass lines, guitar effects, and harmonic vocals.    His was an exciting repertoire of original music and standards ranging from “Chelsea Bridge”, “Reflections”, “Pensativa” and “Ruby My Dear”.    It was an enlightening and intriguing concert that opened up the possibilities of what one can do with a guitar and a few effects, in essence being a one-man band.

I was originally going to go home after the Kurt Rosenwinkel concert but decided to linger a while and catch a few songs by the opening main act of the festival, Janelle Monae.   Boy, did I ever make a great decision to stay.  Not only it was one of the highlights of the festival, but also it really showed how dynamic a performer Janelle Monae is from start to finish.     Along with her R&B/hip-hop repertoire, she sang everything from standards (“Smile), James Bond tunes (“Goldfinger), retro pop (“I Want You Back) all the way to her number one smash tune, “Tightrope”.    In terms of performer, she also displayed her inventive and creative uses of tap dance, and she even did live abstract painting during a performance.    I was really impressed from the get go of the performance abilities of this chameleon of a performer and I cannot wait as to what she can come up with next in the near future.

It was overall a wonderful day to kick off a wonderful festival, showing that at 26 years, the TD Toronto Jazz Festival is alive, here to stay, and off to a great start. 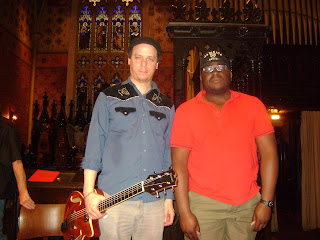 KURT ROSENWINKEL AND ME