CONRAD:  Last year, you did a concert in Las Vegas with a 17-piece band.   What was it like filling in the shoes of legends such as Frank Sinatra, Dean Martin, Sammy Davis Jr. and all the other greats?

CONRAD:   This album is sort of a return to the roots of jazz singing for you.   Do you find it easier to sing jazz standards vs. pop material or is it all just the same in your opinion?

MATT:  Jazz music is much easier for me to sing because I have a real love for standards, I’ve been singing thin music for almost 16 years.   The more you do it, the better you become.   However I’ve discovered there is no ”finish line” in music.   You ‘re always learning

CONRAD: What is it about Chet Baker and his music that intrigued you so much to do this recording?

MATT:    I first discovered Chet Baker when I was a teenager.  His instrumental music was played a lot on the local jazz radio station.   I was amazed at the way he played so softly and beautifully… I wanted to try and capture those moments in my voice on the new album.   I’ve noticed the younger generation doesn’t know anything about Chet Baker, so by doing this album, I hope it will bring greater attention to the great 40 year career that Chet Baker had.

CONRAD:   I know that you received beginning training singing classical music at St. Michael’s Choir School.   What was the catalyst of transitioning from classical to jazz?

MATT:   When I was in my teen years, I discovered “crooning” To be honest I found the music fun loving, almost cheesy.   Soon after I discovered a little thing called Karaoke, and I quickly realized I could have my own big band behind me… well, almost!  I took my karaoke tapes to a few talent nights, and realized it was a great way to meet girls!  I said to myself “I don’t care what kind of music this is… I’m gonna do this for the rest of my life!”.

CONRAD:   When I first heard you, I had to admit that you were a copy of Frank Sinatra at first.   Was it a struggle for you over the years to find your own voice or singing your own material has helped create your own voice?

MATT:   Everybody has a mentor, and the best way to learn is to copy someone.  You use them as a point of reference, and over time you begin to develop your own style. I was fortunate enough to be taught by Bob Fenton, a piano player at York University.  Sadly, Bob is no longer with us, however he taught me how to sing lyrically, just like the crooners had learned long ago.

CONRAD:  In this album, you have special guests ranging from Emilie Claire Barlow, Guido Basso, Ryan Ahlwardt and Arturo Sandoval.   Describe to me what was it like working with these people and how each one of them contributed to the flavour of the project.

MATT:   Most musicians know who Chet Baker is, and know how amazing he was.   The reason I chose Arturo Sandoval as the main soloist was because although he is known for playing high and loud, Arturo can play very quietly and tenderly.  This can be heard on his album “ A Time for Love”.  I’ve known Emilie Claire Barlow for a long time, and thought her voice would be perfect as a duet on “Embraceable You”  It is one the highlights of the album.  I’ve played with Guido Basso throughout the years, and his tone on the flugelhorn is legendary.  When doing a tribute to a great trumpet and flugal player, you have to include him, as he is legend in his own right.  Ryan Ahlwardt did vocal arrangement of “I Fall In Love To Easily” which was a throwback to the Pied Piper’s vocal ensemble work.  Both him and I have a love for that old crooning vocal style.

CONRAD:  So upon release of this album, is there a tour in the works?

MATT:   I’ll be touring across Europe, Asia and North America throughout 2013, with a full Canadian Tour in the fall of 2013.

CONRAD:   Who is your all time favourite singer, and why?

MATT: Frank Sinatra.  I’ve always been enamored by his voice.  Lucky for me, I sing in the same range as he does, so it was always easy to figure out how’d I sound on his tunes.   Sinatra also had a way of singing loud, then tenderly, and had amazing breath control… man could that guy sing!  He was a great inspiration for a young singer in their teens. (me!)

CONRAD:   What is your all time favourite album, and why?

MATT:  My favourite album is Frank Sinatra’s “In The Wee Small Hours Of The Morning.”  When I was going through my first breakup, my jazz ensemble teacher, Mark Eisenman, told me to listen to it.  I was hooked.  I still love the album today, can play it anytime and never get bored of it.  Chet Baker sang a song called, Deep In A Dream, which is also on “Wee small…” I love Chet’s version even more and had to include it on my latest album.

CONRAD:  In your opinion, do you think that classic jazz music has a thriving future ahead?

MATT:  Good music never dies.  The music business will change, but not the love and passion for good music.  It believes it will be nearly impossible to have #1 world wide hit in the jazz/classical genre, but it’s not needed.  Both genre’s have lasted for decades and have become a truly unforgettable genre.  Most genres have difficulty lasting A DECADE!  I truly believe that jazz and classical music will always be available to the discerning ear. 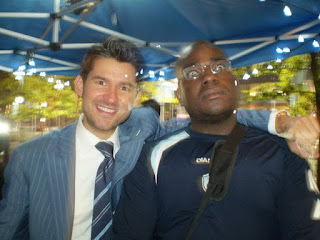