Before opening night, I decided to check out the sneak peak performance of a new play written by one of my new friends.    The play:  Point No Point.

“Point No Point” has got to be one of the most emotionally intense and gripping plays that I have seen in a while.   Yes, the subject matter at times can be disturbing, but after moving beyond the subject matter this was a play that goes very deep on many levels to the point where I was captivated beyond my imagination.

This play is about two lovers, Susan (played by Mylene Dinh-Robic) and Scott (played by Noah Davis).   As a couple, they have a very exciting relationship, but before they want to go forward, they must come to terms with the personal demons that they were facing in the past before getting into marriage, or will they get into marriage?

First off the bat, the acting between the two lead characters is some of the finest acting that I have encountered in a new production.   I believed in the characters.   I felt with the characters.  I even literally was transferred from the seat of my theatre into the sofa of their living room, enthralled by what goes on in one’s house and bedroom.   As a result, I was literally invited into the comfort of their own home, even their bedroom, and didn’t want to leave.

I was even drawn by the intensity the actors portrayed in the play.   It was suspenseful and edge grabbing without the need of gory visuals and effects.   Deconstructing a relationship can be a suspense story all in itself, wondering if it is going to end well or bring a cliffhanger that gets me guessing.

At the same time, this play looks effectively into how different sexes handle various issues that they face in their past and their courage to come up front with such issues.   Susan’s character was one that needed a protector, one who will comfort and get her through the ordeal well.   Scott was one who was the typical macho character.  He wanted to bottle up his emotions, feelings and his past, showing that he can pull throughout without any need of help but his own.   Such juxtapositions were well executed and highlighted in this production.

Do yourself a favour.  Run, don’t walk, to see this show.    If you can handle the subject matter and go beyond, it is an excellent character study that is worthy to be explored.   The acting and direction is excellent, and I was literally on the edge of my seat and this wasn’t a suspense movie.   Noah Davis is an excellent playwright and should even consider having it picked up for a national release or better yet to be on Broadway.   I am really wishing the best of success on its run and looking forward to what Noah Davis and company is going to pull out in the years to come. 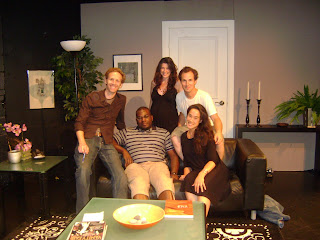